Democratic Republic of the Congo

Home » Our Locations » Democratic Republic of the Congo

The Democratic Republic of the Congo (DRC, formerly Zaire) is located in the heart of Africa. Its central location means sharing boundaries with a great number of countries: Angola, Burundi, C.A.R., Rwanda, South Sudan, Tanzania, Uganda, Zambia and Republic of the Congo. Kinshasa is the capital and largest city, and the location of the African Enterprise DRC office, overseen by Team Leader Leonard Kiswangi. Though endowed with significant natural resources including cobalt and other minerals, as well as forests, the DRC has been plagued by war and civic violence, refugees and internally displaced peoples, bad governance, corruption and a history of colonial exploitation. HIV/AIDS has been a further transnational issue, and resulted in low levels of human development. The DRC is slowly rebuilding through peace and reconciliation processes, but progress has been slow. Please pray for improvements for its people, and that they might come to know Christ.

Leonard has been the AE Team Leader for the DRC since 2007 and has looked to expand the DRC office to engage in local work as well as missions to other locations including Madagascar and Soweto. He worked as the communications officer and administrator for the DRC office, as well as working in AE peace and reconciliation projects before 2007. As the AE Team Leader, he is involved in preaching and teaching at Kinshasa University and working specifically to promote and ensure peace making and reconciliation becoming a reality in the DRC. He is eager to keep learning how to better serve the Lord and make an impact within his generation, in his nation and beyond. In the DRC there is an active university ministry and an ongoing peace building and reconciliation program. 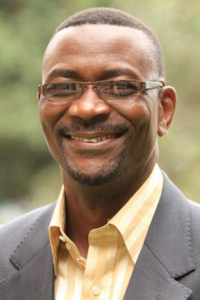 Over 60% of the population of the DRC is under the age of 25, so targeting young people with the Gospel is a crucial step to transforming the lives of urban Africans in the DRC. Leonard’s history of teaching and working in partnership with universities in the DRC, as a student and lecturer has opened doors into a university mission in Kinshasa, the nation’s capital. Université Pédagogique Nationale (UPN) in Kinshasa has been the focus for AE DRC missions, using young mission participants and the university chaplaincy system to connect with their peers. The most important step is in sowing Gospel seeds, to make young people think about the direction their life is headed. One young man, Ernest, who was converted, shared that he was “touched by the testimony shared by the young people”. He has since gone on to evangelise on his own university campus and run a Bible study! Youth reaching youth in Africa is a very effective method of sharing the Gospel.

In 2005, AE began a peace and reconciliation program. It is based on the work of Christ on the cross, with the ultimate objective of denouncing wrongdoing, encouraging repentance and forgiveness, fostering acceptance and developing a culture of peace and security. Sufferers learn to share their grievous losses, to forgive those who have hurt them and to find healing and new life in Christ. Often, former enemies embrace, new trust is formed and the peace from these restored relationships spread throughout cities and nations. Many who’ve found healing receive training on how to train others, creating a dynamic, exponential multiplication of healing and hope.